Tamper-proof archiving with the Blockchain

A new link between the archiving software and Blockchain confirms tamper-proof that documents have not been changed since they were saved.

What is a Blockchain and how does it works?

A blockchain is a decentralized database in which transaction records string together like pearls. In the blockchain information (= data) is stored as in a history. Information is summarised in blocks of data and a hash, a digital fingerprint, is calculated for each block. Each new block also contains the hash of the previous block. These hashes connect the individual blocks to form a chain.

The most important point is - and this makes the Blockchain as valuable as it is - that the information can not be changed subsequently: If one information changes, its hash will also change. As a result, the whole chain breaks apart and the hashes of all subsequent blocks must be recalculated. That´s certainly not easy, because a blockchain is managed via a decentralized network that anyone can join. Even You! Each member holds a complete copy of the blockchain on his or her computer, that checks continuously whether the chain is still intact. Only if any computer on the network has verified a block, a new one will be added. It is exactly this principle that makes a blockchain safe: Everyone controls everyone.

Everyone controls everyone and the "third party" becomes superfluous

Therefore, data are unchangeably logged into a blockchain. Since everyone in the network is able to check information at any time and every piece of information is checked by hundreds of computers with each new one, trust is no longer a matter of human consideration. This also makes a central authority, the "third party", superfluous. Both, the monitoring and the confidence, are established technically and decentrally by the Blockchain. The side effect: In this way, processes are also accelerated. Because if there exists nowhere a central office, it will can´t fail. In general, the blockchain is organized in a similar way to the internet: decentralized.

To store information in a blockchain, a virtual wallet is needed. This wallet is a software that requires very little storage space.

Companies have to keep important documents legally secured. In doing so, the integrity (i.e. completeness and immutability) and authenticity (i.e. confirmation of the authenticity of the data and their unequivocal assignment to the author) of these documents must be maintained beyond the legally prescribed retention period. This challenge can be handled with the blockchain technology: A contract that you conclude today remains locally on your computer or company server. However, the information and the fingerprint (= data) are stored in the document chain - in a well-encrypted data block. At any later time, it can be proved beyond doubt that this contract was in place at the time of its storage. 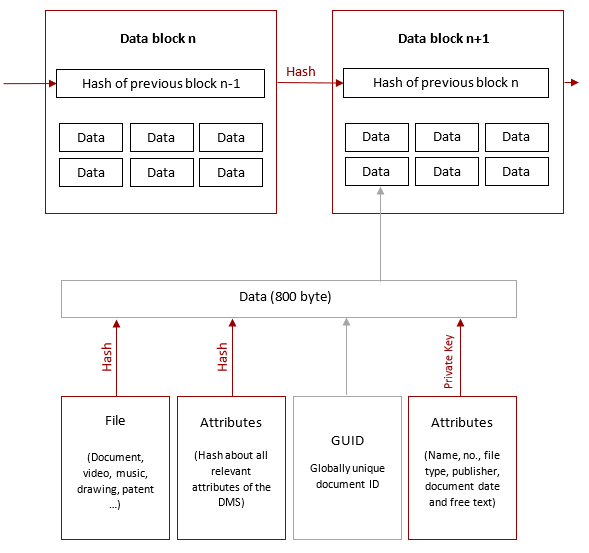 This documentchain is not located on a central computer. Rather, full copies are stored simultaneously on all the computers throughout the network the documents have ever migrated. For that reason, it is so difficult to forge a document, because a counterfeiter would has to jump back to the very beginning of the document chain and rewrite the entire chain with all the changes ever done. So that nobody notices, not one after the other, but at the same time on all computers on which the Documentchain is located.

Demonstrate integrity with the Blockchain

You are still unsure if Documentchain is right for you? Then ask yourself:

If you can answer "yes" to these three questions, Documentchain will be the right choice.

What is a Blockchain?
What is a Documentchain?